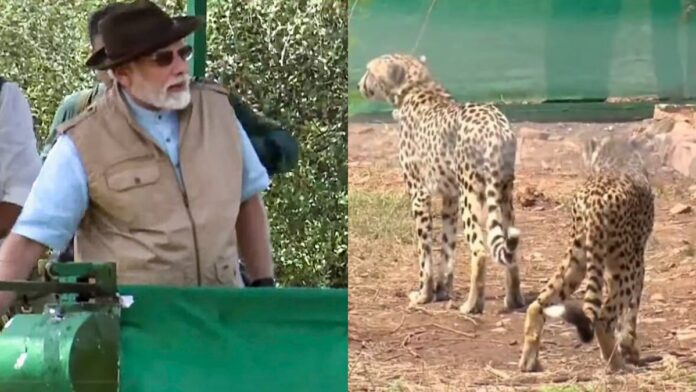 Prime Minister Shri Narendra Modi today released wild cheetahs – which have become extinct in India – in the Kuno National Park. The cheetahs – imported from Namibia – are being introduced in India as part of the Cheetah Project, the world’s first transcontinental translocation of large wild carnivores. Of the eight cheetahs, five are female and three are male cheetahs.

The Prime Minister’s release of wild cheetahs in Kuno National Park is part of his efforts to revitalize and diversify India’s wildlife and habitat. The cheetah was declared extinct in India in 1952. The cheetahs to be released are from Namibia and were brought under a memorandum of understanding signed earlier this year. The release of the cheetah in India is being carried out as part of Project Cheetah, the world’s first transcontinental large wild carnivore translocation project.

Cheetahs will help restore open forest and grassland ecosystems in India. This will help preserve biodiversity and improve ecosystem services such as water security, carbon sequestration and soil moisture conservation, benefiting society as a whole. This effort, in line with the Prime Minister’s commitment to environmental protection and wildlife conservation, will also lead to better livelihood opportunities for the local community through eco-development and eco-tourism activities.

The historic reintroduction of cheetahs in India is part of a long series of sustainability and environmental measures over the past eight years that have resulted in significant environmental and sustainability achievements. . Protected area coverage, which was 4.90% of the country’s geographical area in 2014, has now increased to 5.03%. This includes an increase in protected areas in the country from 740 with an area of ​​1,61,081.62 sq km. in 2014 to the present 981 with an area of ​​1,71,921 km2.

Forest and tree cover has increased by 16,000 km2 over the past four years. India is one of the few countries in the world where forest cover is constantly growing. There has also been an increase in community bookings. From only 43 in 2014, their number is more than 100 in 2019.

India is home to 52 tiger reserves:

•The Asiatic lion population has shown steady growth with a population of 674 individuals at a growth rate of 28.87 percent (one of the highest growth rates to date) from 523 lions in 2015.

A Japanese biotech firm says it has developed the world's first early screening test for pancreatic cancer, using the...